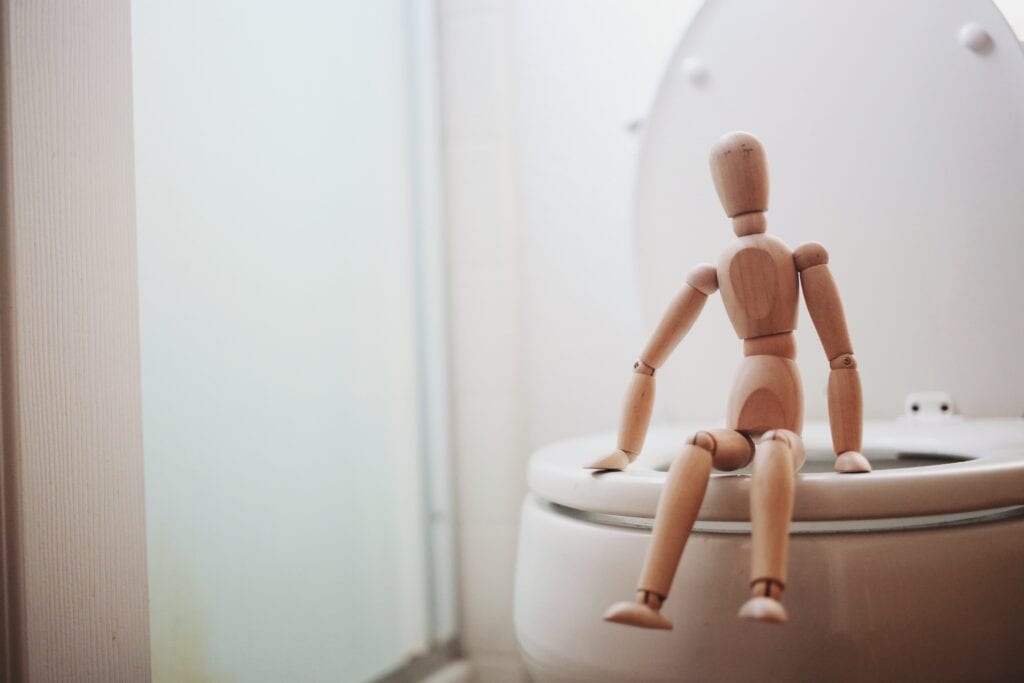 We all poop. Some every day, some several times per day and some a few times a week.

First of all, what is in poo, poop or medically called feces? Some of it is undigested food, lots of water, and dead bacteria.

Around 25% – 54% of the organic material is made up of microbes (dead and living), such as bacteria and viruses.

Bacteria in faeces have been extensively studied. It’s estimated there are nearly 100 billion bacteria per gram of wet stool.

One study that looked at a collection of fresh stools in oxygen-free conditions (as oxygen can damage certain types of bacteria) found almost 50% of the bacteria were alive.

Bacteria, good or bad need food to produce energy and stay alive, like all the other cells in our body.  The food that bacteria needs comes from the fiber we eat. Fiber is basically a prebiotic for the probiotics which are another name for bacteria.  We need a balance of good and bad bacteria.  The good bacteria, or probiotics, make enzymes, some hormones, and some vitamins. They also make the mucus lining in our gut.  All which help the gut be healthy so the immune system can do its job – provide support for keeping us healthy.

If you have ever had a yeast infection either in your mouth or vagina, you have essentially had an inadequate balance of good bacteria. This can be caused by a variety of reasons: antibiotic use, other drugs, taking high-estrogen anti-conception medication,  and some sources also say overuse of sugar.

In any event we need to replace the bad bacteria or missing bacteria with good probiotics.

Where to get probiotics and which ones?

There are many probiotic supplements available on the market today. USANA Probiotic makes an excellent choice for two key reasons: the strains and the amounts used. The two strains of bacteria used in the USANA Probiotic have been shown to colonize the intestines and deliver health results.

Each stick pack of USANA Probiotic contains a unique 50/50 mixture of two of the most studied probiotic bacteria strains: Bifidobacterium animalis subsp. lactis (BB-12®) and Lactobacillus rhamnosus (LGG®). These bacteria are similar to the Bifidobacterium and Lactobacillus that are part of a natural gut flora (primarily found in the colon). Dozens of studies on these strains have demonstrated benefits for digestive health and immunity.*

These strains are so effective, in part, because they survive transit through the harsh, acidic environment of the stomach to colonize the intestines. Reaching the intestines alive is essential for getting results from your probiotic. The strength of the strains is boosted by a small amount of inulin fiber in the formula. Inulin acts a prebiotic, which feeds your natural beneficial bacteria and may further support establishment of Bifidobacterium in the intestine.*

Research suggests that probiotics, including Bifidobacterium BB-12 and Lactobacillus rhamnosus LGG, may play a role in sustaining healthy immune function.*

Why just these two?

Scientific studies have backed these two as important strains to replace in order to establish a foundation for growth of numerous other bacterial strains.  In other words, these two help populate the other 18 strains of live bacteria in the gut.

Barbara makes all kinds of fermented foods. Pickles, kimchi, sourdough bread and others. Here is an interesting article on the relationship between fermented foods and gut health. Eating fermented foods is a great addition to taking probiotics, however, we cannot rely only on the ingested food for optimal probiotic balance.

If you want to talk poop, let us know. Our featured supplements from this month’s newsletter are the USANA Probiotic, Digestive Enzyme, and Hepasil (Liver Support). Check out this link for more information.

The Bring the Balance Bundle

*These statements have not been evaluated by the Food and Drug Administration. These products are not intended to diagnose, treat, cure, or prevent any disease.